Journalist James Nestor becomes a freediver: one of a group of mostly scientists interacting with Moby Dick whales without breathing gear – spermwhales – to depths over 100 feet and for times over 5 minutes duration. They study the whales’ speech and behaviour and next, will be trying to replicate their language and hold conversations about trees and other things whales cannot see from their watery perspective. Once believed too dangerous to attempt, this group has been diving since 2007 with whales that, “can grow as long as 60 feet and weigh up to 110,000 pounds,” and eventually, Nestor dove in too:

I HELD MY BREATH AND SWAM DEEPER, 10, 20, 30 feet. I heard a thunderous crack, then another, so loud they vibrated my chest. Below my kicking feet, two sperm whales emerged from the shadows, each as long as a school bus.

The cracking was coming from the whales; it’s a form of sonar called echolocation that species of dolphins, whales and other cetaceans use to “see” underwater. With these vocalizations, called clicks, the whales were snapping three-dimensional images of my body, and those of my diving companions, from the inside out — scanning us to see if we were a threat, or if we were food.

The New York Times offers a free virtual reality film app for Android or iPhone so you can get a taste of what swimming with whales feels like.

Hat tip to Leen De Weerd-Mosley for the beautiful find. 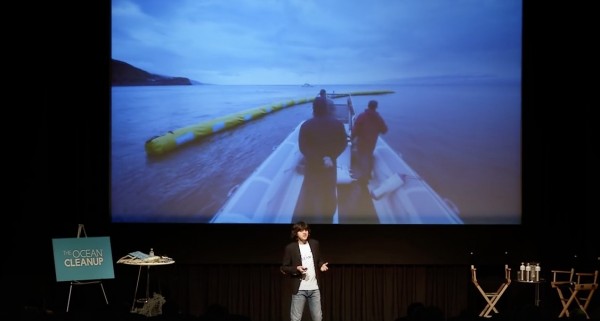 A 21 year old inventor has designed a miles-long filter that will remove the many tons of plastic debris in our oceans … and convert it to usable products, like oil. The storm-resistant equipment will be powered by solar panels and the project will launch next year, in 2016.

Marine life will float right through the filters. Because there are no nets, “entanglement will be virtually impossible,” Slat comments. His Ocean Cleanup team proposes to eliminate about half of the ocean’s floating island of plastic.

Boyan Slat, founder and CEO of The Ocean Cleanup and a native of the Netherlands, offers this comment on the value of his project:

“Taking care of the world’s ocean garbage problem is one of the largest environmental challenges mankind faces today. Not only will this first cleanup array contribute to cleaner waters and coasts but it simultaneously is an essential step towards our goal of cleaning up the Great Pacific Garbage Patch. This deployment will enable us to study the system’s efficiency and durability over time.

Watch Slat describe the journey of conceiving and designing his world-saving invention.

What you can do: help keep plastic out of waterways.

To compete in the 2014 Shore Bowl you need a team, a coach and to sign up by November 30. Teams will be accepted on a first come, first served basis. Shore Bowl overview and registration link.

What Is Shore Bowl?
The Shore Bowl is a regional academic competition for high school students in NJ, NY, and PA that focuses on ocean-related topics. These topics include the biology, chemistry, physics and geology of the ocean, as well as navigation, geography, and related history and literature. The Shore Bowl will be one of 25 regional competitions hosted around the country. The winners of each regional competition will travel to Seattle, WA to compete in the National Ocean Sciences Bowl. Prizes will be awarded to the top teams at both the regional and national levels.

Excerpts from Barry Ritholtz article. It’s a good read with links to many reports and other articles.

Fukushima will start burning radioactive debris containing up to 100,000 becquerels of (highly) radioactive cesium per kilogram . . . even the Japanese – who have raised acceptable levels of radiation to absurd levels – would normally demand that material with this radioactivity be encased in cement and buried . . . many of the incinerators are located smack dab in the middle of crowded cities, and are not equipped to contain radiation.

(Nuclear expert Arnie) Gundersen says that radioactivity from the burnt debris will end up not only in neighboring prefectures, but in Hawaii, British Columbia, Oregon, Washington and California. Gundersen said that burning radioactive debris is basically re-creating the Fukushima disaster all over again, as it is releasing a huge amount of radioactivity which had settled on the ground back into the air.

It is bad enough that radiation from Fukushima is spreading across the Pacific to the United States through air and water, that the Japanese are underplaying the enormous threat posed by the spent fuel pools, and that the Japanese have engaged in a massive cover-up of the severity of the Fukushima crisis. But intentionally burning radioactive debris to try to cover up the problem – and spreading radiation worldwide in the process – is an entirely separate affront.

In addition to burning radioactive debris, Japan intends to build tents over the leaking Fukushima reactors. While this sounds like a way to contain the radiation, it would actually funnel it straight up and spread it globally . . . 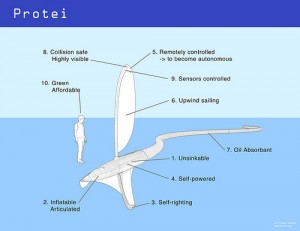 My friend Guillermo Cerceau, who is interested in the health of oceans, is excited about a new technology project called Protei, being developed under Open Hardware Standard licensing in order to help the world, instead of for profit. Protei are swimming, remote-controlled robots which can be used in the ocean to clean up garbage and chemical spills. Protei’s inventors tell us this about their oil cleaning prototype:

Current oil spill skimming technology could only collect 3% of the DeepWater Horizon Oil Spill in the Gulf of Mexico. The health of workers was exposed to cancerous toxic, the boats were expensive and pollutive to operate, they could not operate in bad weather (hurricane seaon) they could not operate at night or far away.

Protei is a technology currently in development that will provide
– Unmanned, no human exposed to toxic.
– Green and cheap, sailing upwind capturing oil downwind.
– Self-righting, rugged, can operate in hurricane time.
– Semi-autonomous : can swarm continuously and far away.

Protei exceeded their Kickstarter funding goal of $27,500 and now are working on a new prototype to clean up waste discarded in oceans.