California farmers are buying fracking waste liquid from the natural gas extraction companies that use high-pressure liquid cocktails – mixed with massive amounts of potable water – to get natural gas out of shale deposits and sell the gas overseas. What are they doing with that radioactive waste? The LA Times reports: watering their crops with it, that’s what.

Oh yeah, the crops we eat. Some farmers are using fracking waste for as much as half of their ‘water’ supply. But this picture of fracking waste looks nothing like water, does it? 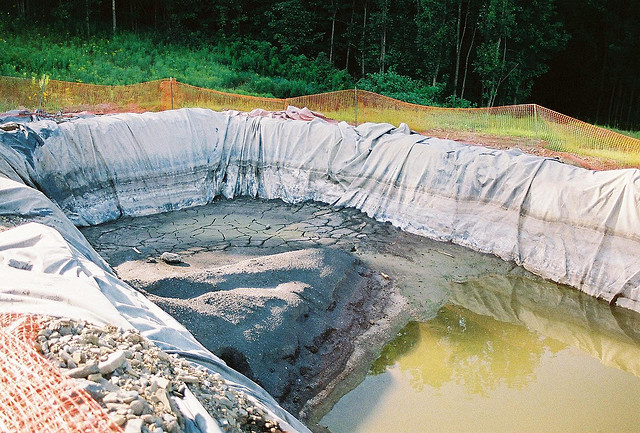 A scientist who sometimes consults for the EPA took fracking liquid samples at 10 sites over an 8 mile canal where it’s channelled to farmers and found,

The samples (Scott) Smith collected contained acetone and methylene chloride, solvents used to degrease equipment or soften thick crude oil, at concentrations higher than he said he had seen at oil spill disaster sites. The water also contained C20 and C34, hydrocarbons found in oil, according to ALS Environmental, the lab that analyzed Smith’s samples.

The farmers seem to think none of this is a problem, but then again, these are the same people that for years have taking 80% of drought-ridden California’s potable water supply to grow commercial crops. How much can their judgement be trusted?

“But on the plus side,” as Facebooker Ben Ogden points out, “all the veggies will be easier to find in the dark…”

I like one Grist reporter’s comment on the story. Now, I can’t wait until June 15 rolls around and the American public gets to learn exactly what nefarious chemicals are in fracking liquid.

There’s a certain amount of WTF to all this — because we don’t even know what’s in this fracking waste, at least not until June 15. That’s when California’s fracking regulations kick in and force oil companies to disclose the chemicals they are using. I mean, maybe just wait to find that out before using it to water our cherries?

Thanks William Rivers Pitt for making me aware of this disturbing, but important, news.