On Thursday, Pope Francis released his 180-page papal encyclical, “On Care for Our Common Home”, which sets for the need for the people of the world to halt climate change and end global social injustice. I have high hopes that his statement will change our world, transforming personal human choices that have led us to the brink of nature’s destruction and ultimately, our own … because the Pope’s standing as a world leader is never in dispute. 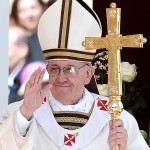 I have noticed that even lapsed Catholics, people whom are not Catholics and people who do not believe in Christ, nonetheless respect the Pope and pay attention to His Holiness’ edicts and opinions.

The Guardian provides an overview of the encyclical. Here’s an excerpt:

Pope Francis has called on the world’s rich nations to begin paying their “grave social debt” to the poor and take concrete steps on climate change, saying failure to do so presents an undeniable risk to a “common home” that is beginning to resemble a “pile of filth”.

The pope’s 180-page encyclical on the environment, released on Thursday, is at its core a moral call for action on phasing out the use of fossil fuels.

But it is also a document infused with an activist anger and concern for the poor, casting blame on the indifference of the powerful in the face of certain evidence that humanity is at risk following 200 years of misuse of resources.

Up to now, he says, the world has accepted a “cheerful recklessness” in its approach to the issue, lacking the will to change habits for the good of the Earth.

“Climate change is a global problem with grave implications: environmental, social, economic, political and for the distribution of goods,” the papal statement says. “It represents one of the principal challenges facing humanity in our day.”

…The pontiff included a personal handwritten note in his communication, ending with a plea for help: “United in the lord, and please do not forget to pray for me.”

Another Guardian article shares reactions from scholars and citizens around the world. Prof Ian Gough speaks to the difference between need and greed, terms Pope Francis reintroduces to global discussion that modern economics has buried:

• Pope Francis’s encyclical “on care for our common home” introduces two terms buried by modern economics: “need” and “greed”. These represent two opposing worldviews. One seeks to satisfy our wants or preferences, which are limitless, non-satiable, substitutable and amoral. The other prioritises meeting universal human needs, which are limited, sufficient, non-substitutable and with clear ethical grounding. By counterposing these and putting them centre-stage, he has clarified the egregious moral dilemma inherent in climate change in a way that can unite both religion and humanism.

The pope also takes issue with the arguments of green growth, which is the current dominant strategy to handle climate change. Yes, we must support the fastest possible decarbonisation of the global economy through eco-efficiency, as Nicholas Stern persuasively argues in his new book, but at some point, very soon, we will need to switch to post-growth strategies.

I’m interested in knowing your views on the Pope’s encyclical and the impact it may have on our world. Please share …